Facebook and privacy aren’t exactly synonymous with each other. When Mark Zuckerberg first burst onto the scene out of his Harvard dorm room he quickly declared personal privacy to be dead. Since then he’s waged a long, slow, and hard war on the things we hold dearly and, more importantly, privately to ourselves. He knows everything about us, and even knows plenty about people who don’t even use Facebook. 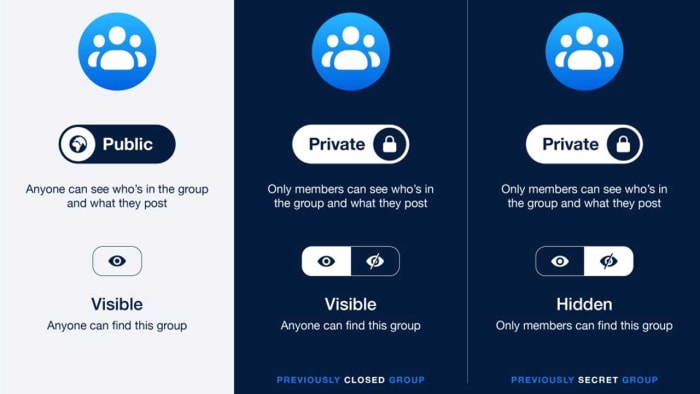 This has worked out well for the Zuck and his company as they’ve been raking in the cash at an incredible rate. At the same time though, Facebook and Zuckerberg are steeped in controversy and the social media giant seems to be stumbling from one privacy-related crisis to another. We don’t need to get into Cambridge Analytica when a record $5 billion fine is so fresh in everybody’s minds.

It could be that these seemingly never-ending scandals are behind Facebook’s latest moves to beef up the privacy settings for Facebook groups. Let’s take a look.

A recent Facebook blog post announced some changes to Group Privacy settings. The idea behind the changes is to make it much easier to control who sees what is going on in the groups you’re an admin of. You could see this a tacit admission that the old system was deliberately designed to be too complicated, but let’s not go there.

The post reads, “With two clear options, this new privacy model is much more intuitive. Public groups allow anyone to see who’s in the group and everything that’s shared there. With private groups, only members can see who else is in the group and what they’ve posted.” This means that if you post anything in a private group, only the registered members of the group will be able to see it. There is another setting, however, that Facebook has added.

Not all Private groups want to be hidden. Sure, the content of the group might contain sensitive information but that doesn’t mean that the group doesn’t want to be discoverable to new members. For these types of groups, admins will be able to set their private groups to “Visible”, if they so wish. This will make the group discoverable by anyone, while the “Hidden” setting will make it only possible for members of the group to find it. Public groups will always remain visible to everybody.

This is only a simple change, but the new Facebook groups privacy model is much clearer. The new options are presented in clear panels with simple switches being used to toggle groups between being public and private, and then with a further switch toggling private groups between being visible and hidden. These new features should be live now. If only things had been so simple from the start.

How to find out what Facebook knows about you ►